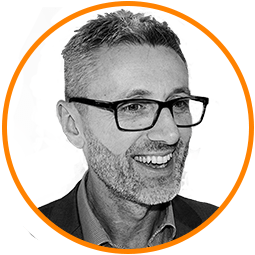 What does he do?
Steve is the one that inspires us to achieve more. (We have to say that!).

Background
Steve was previously a Sports Centre Manager, a Weatherman, a Marketing Manager and an IT Manager.  He’s worked for companies such as Giorgio Armani, Ralph Lauren, The Met Office, and Andersens.

He’s also the founder and inspiration behind projectfive, which he set up in 2002 in the wake of the Enron scandal (projectfive was responsible for recovering the electronic data from the UK that helped with the investigations).  Since then, Steve has grown projectfive into the award-winning business, and wonderful place to work, that we all love.  And, in recognition, he was voted SME Director of the Year for London and the South East, by the Institute of Directors in 2016.

Did you know?
Steve won the Offshore Powerboat Formula II World Cup in 2000, which included winning the Cowes-Torquay-Cowes race – one of the oldest running sporting events.  He married both his Scout Leader’s daughter and his band’s Lead Singer (yes, it’s the same person!), and has two children – Alexia and Nathan.