x close
Has Microsoft over-stepped the line by ‘forcing’ adoptions of Windows 10?

**Update** On 28th June 2016, Microsoft announced that they would change the automatic upgrade process.

“If the red-x is selected on this new dialog, it will dismiss the dialog box and we will notify the device again in a few days.

“We continue to recommend all of our customers upgrade to Windows 10 before the free upgrade offer expires on 29 July.”

But the crucial point here is that it should be your choice as to whether or not you decide to upgrade – something which Microsoft seems to have overlooked, in their recent quest to (rather forcefully) encourage users to make the upgrade prior to 29th July.

This dialogue box has been popping up on screens: 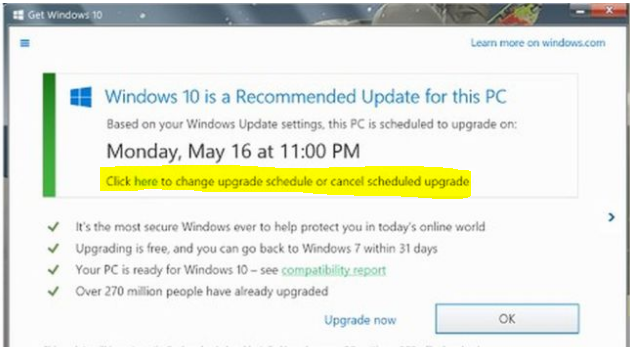 Users have had this notification appear, because the update to Windows 10 is now labelled as “recommended”, and many people have their PCs configured to accept recommended updates for security reasons.

In our opinion, Microsoft have used this knowledge to coerce people into automatically adopting Windows 10 based on their PC’s update settings. Not a tactic which goes down well with users, even if they are being pushed into using something that’s free.

A prime example of this was in 2014 when Apple outraged customers by automatically installing the new U2 album on their devices, whether they had asked for it or not. It was a marketing tactic that failed spectacularly, with many users claiming that the album was hard to remove.

What has also infuriated many users is that clicking the red cross at the top of the pop-up does not cancel the scheduled upgrade, as it has done in the past. Now users have to click the link (which we have highlighted) to change or cancel the upgrade schedule.

Senior editor at PC World Magazine Brad Chacos, who describes himself as a fan of the Windows 10 operating system, has been a vocal critic of what he described as the “heavy-handed tactics that Microsoft’s been using to force people into the upgrade.” He believes that, “at the very least they should add a large, obvious ‘No, I don’t want this’ button.”


Here at projectfive we genuinely like the new Windows 10 and there are many features that we think are huge improvements compared to earlier versions. But the choice to upgrade should always be yours.

If any of our customers are unsure as to whether or not to make the move to Windows 10, they can call the projectfive team and we’ll help you make an informed decision.