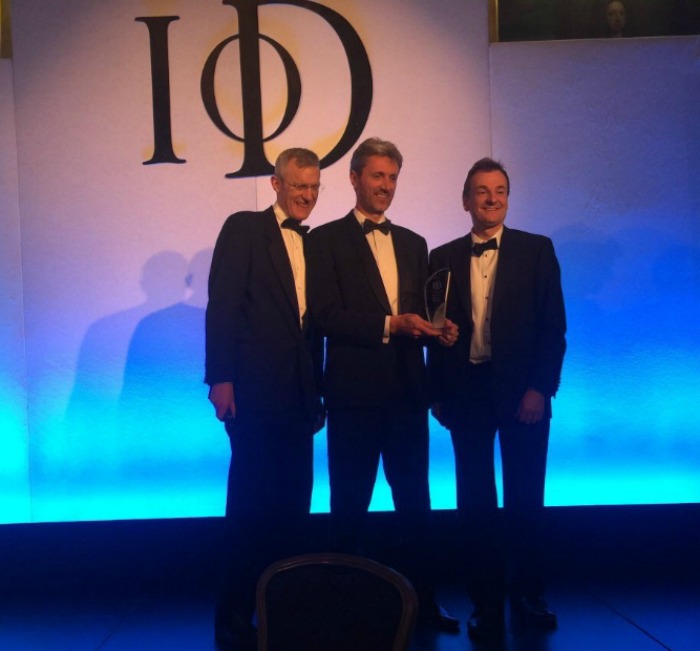 We are absolutely thrilled to announce that our MD, Steve, won the award for Director of the Year for London and the South East, at the Institute of Directors last week!

The Director of the Year Awards celebrate the very best in UK business. They are a public recognition of the key role that directors play, not only in the UK’s economy but also in job preservation and creation. They place emphasis on individual excellence and achievement – and we couldn’t think of a worthier winner (yes we’re biased, but yes it’s true!).

Winning this award is a huge accolade for Steve and well-deserved recognition of his hard work in driving our company forward. He empowers us all to be the best we can be, and fosters a team spirit that is passionate about what we do and always links back to our three key values: to help people, make friends and stand out.

When he walked into the office the morning after the awards ceremony, we congratulated him in true projectfive style – by showering him with orange stress-balls and cracking open the champagne!


Here’s what some of the team had to say:

“I can think of no one that is more deserving of this award. Steve is not only a great boss, he leads by example and ensures that he is always helping people, making friends and standing out. He continually inspires everyone around him and gets the best out of those that he comes into contact with.”
Peter Van Sittert, Client Delivery Manager

“Congratulations Steve! Everyone at projectfive benefits from your leadership, and it’s great this is now recognised further afield.”
Phil Dear, Support Manager

“Congratulations on your award Steve. I have been at projectfive for a little over 2 months and I can see exactly why you deserve this award. I anticipate loads more awards coming your way. Well done boss!”
Mo Sadiku, Project Manager

“Huge congratulations to you Steve, a very deserved win! It’s great to see the culture that you have created at projectfive be recognised in this manner.”
Andrew Fletcher, Infrastructure Team Leader


And finally, here’s a few words from the man himself:

“I was so pleased to win. I honestly didn’t expect it and it hasn’t quite sunk in yet. It’s at times like these when you want to thank the team around you for their hard-work and dedication – our success is jointly earned and, whilst it may be the most obvious cliché to say, it really is a team effort! There is a real buzz in the office (more so than normal), and you can see how proud it makes everyone in the company feel.”
Steve Coburn, projectfive MD (and Director of the Year!)


Congratulations Steve – we’re all so proud of you!

Posted in General | Tagged awards, Director of the Year, Institute of Directors, Leadership
Leave a comment |

One response to “WINNER: Director of the Year!”