We’re absolutely delighted and completely surprised to win the SMB Reseller of the Year award.
It means so much to us as a business, and individually, to be recognised in this way. Everyone is buzzing and really proud of what we’ve achieved.

We’re no strangers to winning awards, but this one has to go down in history as a massive achievement for us, and a major milestone in our continued growth… our first industry award!

At star-studded glitzy evening in Battersea in November, we were thrilled when we heard Rob Brydon announce that projectfive had won the ‘SMB Reseller of the Year’ at the CRN Awards.

The Computer Reseller News ‘SMB Reseller of the Year’ award recognises excellence in the delivery of solutions, service and support to Small and Medium sized businesses. The other firms who were shortlisted all appeared to be much bigger and more successful than us – but the judges spotted something about us, something that makes us stand out, something a little special. 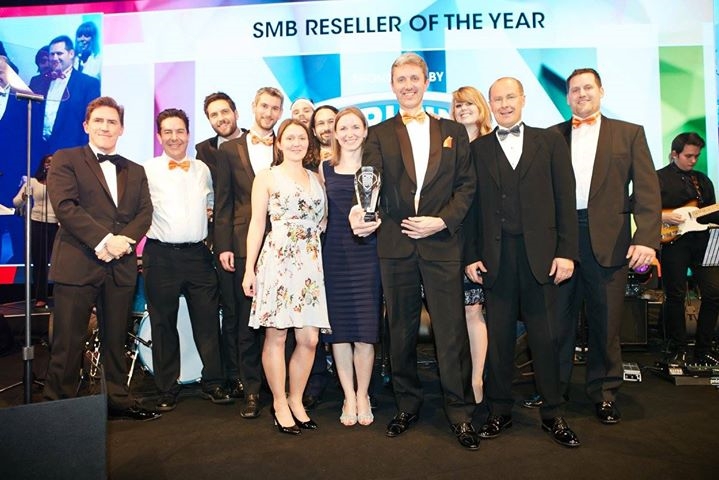 Our MD, Steve Coburn, said “It’s our greatest achievement to date – to be recognised at such a prestigious UK-wide computer industry event as the Best IT Reseller for SME’s in the UK is fantastic achievement for us – we’re all very proud of ourselves, and really pleased that the judges were able to see how special we are.”

“We know we’re a small company and we have a long journey ahead of ourselves. We’re hoping that this award will give us a huge boost in our visibility within the IT industry. We know we’ve got a good story and are striving to do things differently. All we’ve got to do now is figure out how to keep this momentum going!”

It was only meant to be Steve who went to collect our award, but we all bounced and danced our way to the stage whilst the band playing ‘Up all night to get lucky’. The spotlights followed us all the way to the stage and we crowded into the official photographs with Rob Brydon.

After that, the evening was a bit of a blur. But there were lots of pictures all over Social Media, and a fair few bottles of Champagne drunk. And, we made sure we looked the part too – the boys were wearing orange bow-ties with their DJs, and the girls had all ‘accessorised’ with something orange.
Of course, there were a few hangovers on Friday morning – but we can forgive that!

Now, it’s back down to earth, as we concentrate on making sure we continue to look after our customers…