Google is the internet search king, there’s no denying it, they have had a bullet-proof formula for success and gone from strength to strength over the years, but with personal assistants now ruling the Mobile and Tablet search market, where exactly does Google’s search options fit into this? 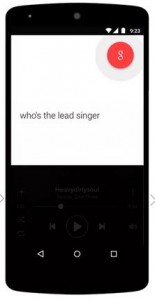 Google are looking to take this Personal Assistant service to the next level with “Now on Tap”, their answer to Siri and Cortana. “Now on Tap” will make its debut later this year on the new Android smart phone, currently known as “Android M”.

“Now on Tap” will work in a similar fashion to its rivals Cortana, and Siri however it can also work with its user and the web pages they are on to answer queries, leading to a more efficient assistant as it fins information from a webpage much quicker than a person could by reading all the information.

Whilst Google may be essentially following the trend of Apple and Microsoft in terms of implementing a digital assistant, they’ve been quick to state their differentiation in terms of product. Whilst Cortana and Siri have been built with different voices and tones in which they speak, Google is adamant to keep “Now on Tap” monotone and lifeless so as to ensure no offence to users from the assistants tone of voice!

This could be a great step forward for Google by expanding their search capabilities and playing to their strengths of search functions, but with Apple and Microsoft currently expanding their personal assistants to other platforms, Amazon offering a similar service called “Alexa” to new platforms and even Facebook working on an assistant tool, could this market place be getting a little too crowded? Are Google too late to the party? Let us know what you think of “Now on Tap” below in the comments section.