The launch of Windows 10 can be called a lot of things but ‘unsuccessful’ isn’t one of them, with 14 million individual downloads in the first 24 hours, it’s fair to say Microsoft don’t have anything to worry about. But, whilst proving popular, Windows 10 has left some of its customers questioning its quality.

In this day of cynicism and big business it can be hard to trust any large corporation and their motives, what with Apple’s “iCloud” being the victim of a hacking scandal and Google having fought with the EU over antitrust cases, it would only make sense for Microsoft to have a privacy scandal of its own. Well surprise, surprise Windows 10 has had a share of the controversy with some of its new privacy features. But is it as bad as people are making out? Or are bloggers just looking for something else to complain about? Let’s have a look…

During the installation process, the “express settings” have proved unpopular. Whilst there’s nothing too suspicious to begin with, Microsoft don’t try to hide their data collecting agenda:

– Under the heading “Connectivity and error reporting” Microsoft have taken it upon themselves to automatically connect you to networks without your consent, despite stating not all of them are secure.

– Once more without explicitly asking, Microsoft have put down that all error and diagnostic information will be sent to them.  This could mean sensitive files and information are being sent without your knowledge. If you value your privacy then it’s best to turn these settings off.  We will be releasing a video to our YouTube channel to show you how to do this.

Microsoft’s data collecting methods aren’t anything new, Cortana works in the same way as Apple’s Siri to learn about you and collect personal information, as does the new Edge Browser but this shouldn’t really shock anyone, Apple and Google have been doing it for years. 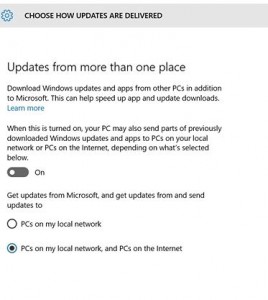 One of the biggest problems has come from Microsoft allegedly “stealing” bandwidth. The “Windows Update Delivery Optimization” feature may sound harmless and whilst its purpose is to ensure faster downloads of Windows 10 updates, it does so by using a ‘peer-to-peer sharing method’… essentially using your bandwidth to deliver these updates to others. For those on a limited amount of bandwidth this could cause problems as it drains their internet usage without them so much as opening Internet Explorer.

The good news is all these “new features” can be turned off one way or another. Whilst a little sneaky in places, it’s fair to say any claims of “invasion of privacy” are unfounded, and if this is the worst trait of Windows 10, then we’d say Microsoft have done a damn good job!

Update: Microsoft have published a blog addressing any issues surrounding privacy stating “No other company is more committed, more transparent and listening harder to customers on this important topic than we are.”