x close
Windows: From the start…button

Windows 10 is almost a month old, privacy and piracy controversy aside it’s fair to say the Operating System has had a very successful start, with good reviews and mass downloads the internet is proclaiming that “Microsoft is back”. For as big as Windows is now, it’s always important to remember just what helped catapult it to the money making machine it is today, and what better excuse to have a walk down memory lane than the celebration of Windows 95’s 20th birthday. 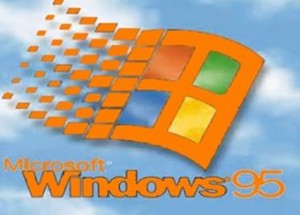 It was on August 24th 1995 that Windows 95 was released and changed the face and standard of Operating Systems as we knew them. Paving the way for future Operating Systems it’s hard to believe something as small as the start button and accompanying menu was so revolutionary when first introduced with Windows 95. With Internet Explorer released within the same month Microsoft managed to take the world by storm all within the space of two weeks.

It was three years later than Microsoft launched their next Operating System: Windows 98, the most popular Operating System of the 90’s. Another three years pass and Windows are still going from strength to strength with the release of XP. Yielding rave reviews and huge demand, XP went on to be the most widely used OS for over a decade, but was the Windows juggernaut about to run out of steam?

2006 saw the release of Windows Vista, essentially seen to many in the computing world as the beginning of Microsoft’s fall from grace; having never managed to reach the popularity of its predecessor XP. Slow loading times and higher costs were just a few of the criticisms Vista faced but perhaps the biggest problem with Windows Vista was that it was released in 2007, just as the world plunged into a deep recession. Businesses and consumers alike reigned in their spending, and sales of new PC hardware fell dramatically. When the next version (Windows 7) was released, only 19% of the market were using Vista as opposed to XP’s 63%.

Windows 7 saw a return to form with generally positive reviews and breath-taking sales of over 630 million within the first three years of release. It wasn’t long however before the pressure of competitors forced Microsoft to change their take on Windows, leading to yet another setback: Windows 8!

Following its release Windows 8 struggled to match the popularity and success of Windows 7. With negative reviews and disappointing sales, Microsoft blamed the decline in the PC market whilst critics and users blamed its unfamiliar and often awkward user interface. Essentially one of the widest reported problems for audiences was the removal of the “Start Button”, flash forward to present day, Windows 10 is taking nods from its past and reinstating the Start Button that first seen 20 years ago with Windows 95.

There’s no doubt that the success of Windows 10 is due to more than just the reintroduction of a “start button”, however its undeniable that changes to make Windows feel familiar to its users again have helped play a key role. Advances in the technology market make it impossible to stay the same for too long, but in this case we think it’s fair to say Windows learned not to fix what isn’t broken.