Projectfive are proud supporters of the 2015 Camberley Car Show, and one of its main attractions “Bloodhound – The Super Sonic Car”. 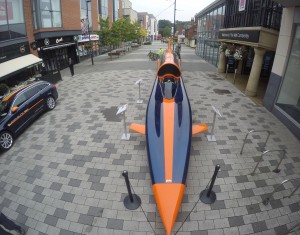 The Camberley Car Show is an annual event that features all kinds of famous cars from all over the world that range from the Formula One six-wheeler “Tyrrell P34 “to the nostalgic Chitty Chitty Bang Bang car!

This year’s show will be raising money in aid of the South West Thames Kidney Fund who support essential research into kidney disease and diabetes. Whilst entry is free, donations are more than welcome and every penny goes to charity!

The 2015 show looks to be Camberley’s biggest with the feature of Bloodhound: The Supersonic Car designed to go faster than the speed of light. Reaching a top speed of 1050 mph, speeding by the equivalent of four and a half football pitches in one second and covering 150 meters in the blink of an eye, it’s no surprise locals and enthusiasts are racing to be the first to see it.

What we love most is the ethos behind Bloodhound, much like projectfive they are 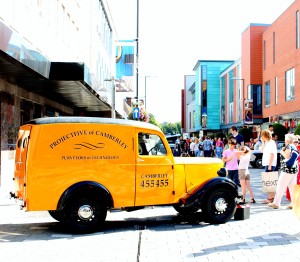 focused on helping people, making friends and standing out. Over 300 new jobs were recreated in South Africa to help clear rocks and stones from a dry lake bed to help create “the world’s best race track” for Bloodhound to drive on.

Furthermore they’re a part of “The Bloodhound Project” an education based project created to encourage future careers in science, technology, engineering and mathematics, by showcasing the more exciting and interesting sides of these subject to those currently in education. The project is followed in over 220 countries, with over 6000 schools using their technical content in the UK alone, and well over two million children have enjoyed their activities worldwide thanks to free lesson plans and over 10,000 learning resources that they have provided.

These are just a few of the reasons we can’t wait to get down to the car show on Saturday 22nd August and be a part of the action!

To find out more about the Camberley Car Show head on over to: http://www.camberleycarshow.co.uk/

And for further information about Bloodhound go to: http://www.bloodhoundssc.com/